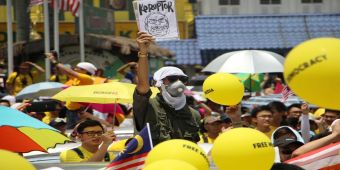 The soundtrack to the growing Malaysian pro-democracy movement is a song by a group of young Malay musicians, whose band is called Bandsart. Named after the inner Kuala Lumpur suburb where they grew up, Bangsar, the band’s members are all friends and activists who have been playing together for about four years.